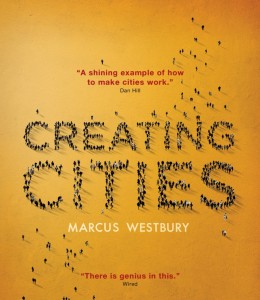 Want to know more about the how, what and why of Renew Newcastle and Renew Australia?

Over the last 2 years Marcus Westbury has been working on a crowdfunded book that tells the story of the Renew idea from the very beginning.

According to Matthew Westwood in The Australian newspaper:

Creating Cities, about Renew Newcastle and the lessons learned. It’s part memoir, part how-to guide, and is very readable. It starts with Westbury’s frustration, on returning to his home town after several years away, at seeing the vacant shopfronts in the city centre, his desire to do something with those empty spaces and the obstacles — legal, regulatory, bureaucratic, economic — that stood in his way.

It’s astonishing to read that when Westbury contacted commercial real estate agents about their vacant properties, no one returned his emails or phone calls. Even a former mayor tried to discourage him, denying that Newcastle even had a problem with empty buildings.

He writes very persuasively about the over-regulation of public spaces, and what seems to be a determination on the part of civic authorities to squander the goodwill and enthusiasm of imaginative, dedicated people.

“What grips me is how places enable or thwart people with initiative,” he writes with the authority of someone who has fought such battles himself.