House House is an independent, Melbourne-based videogame company founded by co-creators Nico Disseldorp, Stuart Gillespie-Cook, Jacob Strasser and Michael McMaster. In 2016 it released its first game, Push Me Pull You, and in 2019 released the second, Untitled Goose Game. This low budget project has since flown to the top of Nintendo Switch’s Australian and US download charts and number two on the British charts, has had over a million views on Youtube and has inspired a flood of memes. 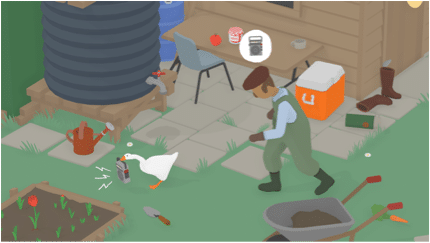 House House became a participant in Renew Australia’s Docklands Spaces project, in collaboration with the City of Melbourne and Places Victoria (now known as Development Victoria). The Dockland Spaces project provided 24 new and creative businesses the opportunity to trial their ideas across gallery, studio, office, retail and training spaces with minimal overheads.

‘Participating in the Dockland Spaces program helped us treat our project as actual work, rather than a part-time hobby. Having a space to work helped us take ourselves seriously as creative professionals. The low cost of the program was a huge deal for us.’ said House House co-owner and co-creator Michael McMaster.

Dockland Spaces allowed House House to develop their own IP. ‘Before the Renew program we had been working out of bedrooms and living rooms. We were working on it part-time as a kind of summer project. We could only call ourselves hobbyists. We didn’t necessarily intend to professionalise. Having a shared communal space meant that we could work collaboratively on our project in a more serious and focused way. Having a ‘free rent’ space in the Renew program helped us develop our creative practice and business by providing the space to experiment and trial an idea – with little to no overheads – to build a more sustainable long-term business.’

‘A space like Renew is a very important place to take that step more seriously. Without that space, I don’t know if we’d still be making games. We would have continued working in other industries. It gave us a space to focus the work and allowed us to see it not just as a side gig, but to take the risk and trial our idea.’
‘During this time we also started applying for funding grants and were eventually able to pay ourselves a wage for the work. Having the space was a very formative step to transition from side project to what we do as a job.’

House House exited the Dockland Spaces program after approximately 12 months and vacated the space (as the property owner had given 30 days’ notice as per the Renew Australia program deal to get free rent). After leaving the Renew program, House House went on to sign a commercial lease in Collingwood. Now located in Fitzroy North, the team value having their business in Melbourne, being close to family and friends and benefiting from the opportunity to collaborate with the local creative and gaming community.
‘As game developers, we benefit a lot from the community in Melbourne. We are able to dip in and out of the local development scene to find contractors and developers to work with us.’

How did you meet?
We were part of same friendship group and had a common interest in games. With Renew, we were just trying it out to see if we could make a game without that game background, as two of us studied fine art while another studied film.
Our company is still four people, but we’ve just finished a three-year project which employed an additional four part-time contractors. We’re more interested in working sustainably at our current scale than growing, and I’m happy to say that the success of our most recent project will allow us to continue working for many years to come.

Where to now?
We’re still figuring out our next steps. The business is sustainable now and we feel very privileged to be able to keep making games that keep the four of us happy. We felt very glad to be able to bring on other contractors. Right now we’re staying on top of what has come up post release. We’re not super growth oriented and just want to continue making games as we have been in Melbourne.

Would you recommend participation in future Renew Australia projects?
Yes, I absolutely would. It goes without saying that having dedicated space to do your creative work is a huge benefit. I don’t know where we would be without this. Giving anyone space to develop their ideas and make that work is such a useful way to empower those emerging creatives. It all comes down to space. If a program can make room for creative professionals at all stages of their career – studios, office space, anything – that would be a great boost to the development of local creative industries.

It was also nice to be able to let other friends work in our space, as even when you’re not specifically collaborating, co-working spaces allow you to ambiently share ideas.

What’s the greatest challenge of running a creative business?
The process of turning a hobby into a job can be such a slow process. We were very fortunate to each have stable jobs, then we worked on the game on top of this. We were just happy to be able to work on this thing together without too much expectation. Being able to pay ourselves took a long time to happen. And also to become a sustainable business. There is amazing state support for game development in Victoria.