Ritual Sequences is the latest addition to the Renew Fitzroy Street Project (RFS); a mural occupying the entire facade of 61 Fitzroy Street.

Recognised as the last ‘major blight on the strip’,the 61 Fitzroy Street building’s only future prospects looked like being condemned as a result from years of punishing treatment by a collection of extreme anti-social behaviourists. Its heyday as Poison Nightclub heralded only by the remaining blue neon sign adorning the front entry. As an immediate order for action, Council ordered the building owner to erect hoarding across the facade in an attempt to relocate the anti-social ‘camps’ that frequented the doorway.

The building is planned for demolition to become part of a new development along 100m of the central strip of Fitzroy Street which aims to implant a renaissance effect for the grand ole dame boulevard that for decades has connected our city to the sea.

An opportunity arose to engage a local artist to paint the building; a temporary transformation which in turn would provide the community with a large public artwork that would provide colour and dynamism in lieu of the desecrated former kebab shops.

‘Collaboration is what thrills us at Renew Australia and the Poison building was ripe for such an occasion’. Renew Fitzroy Street Project Manager, Mish Eisen established the project by connecting interests of the building owner, the City of Port Phillip – Street Art Officer and the artist, who is one of the OG participants in the Renew Fitzroy Street program. Together, they raised capital to a value of over $15K from a starting point of zero, including anti-graffiti coating to the artwork, an essential ingredient in a street that suffers from the mindless pastime of ‘taggers’.

Rus Kitchin, is a second generation street artist in Melbourne who, prior to establishing a gallery/studio on Fitzroy Street as part of RFS, spent 15 years working alone in his studio. Although not unusual practice for a visual artist, the relocation of his studio to a shopfront on a main inner city street has literally ‘opened his world’. In the short period of a year, he now engages with people on a daily basis, has held solo exhibitions of his own work and opened his studio to art students and community group tours as well as taking part in Art Walks and collaborations with other local businesses. Although in his renegade days Rus painted trains, he has never been commissioned to paint a facade or a public work which has such immediate accessibility for public engagement. The mural is his largest work to date.

In Rus’ words, ‘ I wanted to explore a large scale, semi-abstract painting that had a connection to my studio work, yet which also represents a cathartic departure from the image laden work I usually do’.

Ritual Sequences, is an abstract painting on a building facade. Unlike politicised, figurative or commentary street art,  it invites people to respond purely on an emotive basis: colour, form and scale become the triggers for engagement. Although it is art on the street, it sits within another category than street art and introduces an alternate experience for all those who pass by.

Projects such as Ritual Sequences are made possible by those of us who believe in how the impact of public art can affect our lives for the good, and those of us who are willing to take a leap of faith to embark on new journeys. 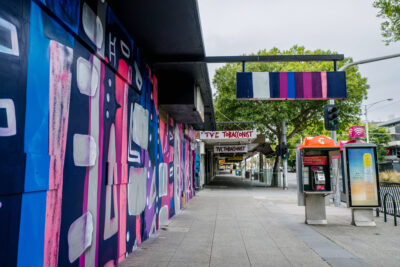 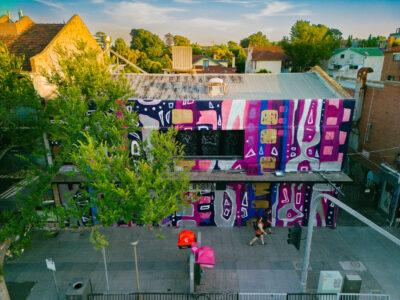 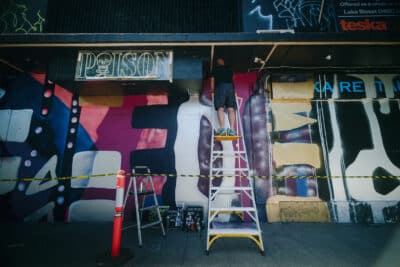